中文 | English
Home > Actor > Classes > Diction of Standard Mandarin
"I needed to improve my Mandarin for work, and it exceeded my expectations!"
— Edward Choy
""我从中了解了一些说话的坏习惯，同时也重新刷新对华语的了解，以及正确发音部位和方法。"
— Lim Meng Jiat
"I have learnt to articulate better and make my pronunciation more precise."
— Mitchell Fang

This is a basic class for people who want to speak Mandarin with proper diction. It aims to equip participants with the fundamental knowledge of Mandarin pronunciation, such as the correct enunciation of consonants, vowels and tones. It also aims to impart knowledge of standard spoken Mandarin, including ways to vary tones in speech. Participants will practise their tone of speech with different genres of text.

Application is now open.
Deadline for application: 24 October 2022
(All applications are processed on a first-come, first-served basis for this class).

**Information on using SkillsFuture credits will be available at a later date. 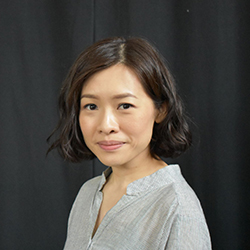 Mia is an actor, producer and theatre educator. She started learning to perform in standard Mandarin at the age of 9 when she joined Rediffusion's children radio drama group. Since then, she has been performing in school through her teenage years and eventually graduated with a BA in Theatre Studies and Chinese Language from the National University of Singapore. In addition to that, Mia was in the 2nd batch of students training under the former Theatre Training and Research Programme (now known as Intercultural Theatre Institute) and studied close to 2 years, before becoming a proud mother to her twin daughters. Mia had also been moonlighting as a part-time DJ at Y.E.S. 933 FM from 1997 to 2013. She has worked with various theatre companies such as Toy Factory Productions Ltd, Dramabox, The Theatre Practice, Paper Monkey Theatre, The Necessary Stage and TheatreWorks. Recent works include Tartuffe (2015), An Enemy of the People (2014), The Bride Always Knocks Twice (The Theatre Practice, 2013) and Who's Afraid of Virginia Woolf? (Nine Years Theatre, Macau Arts Festival 2013). She was a founding and core member of the NYT Ensemble through its journey (2014 - 2021), and led the ensemble in vocal and speech training.